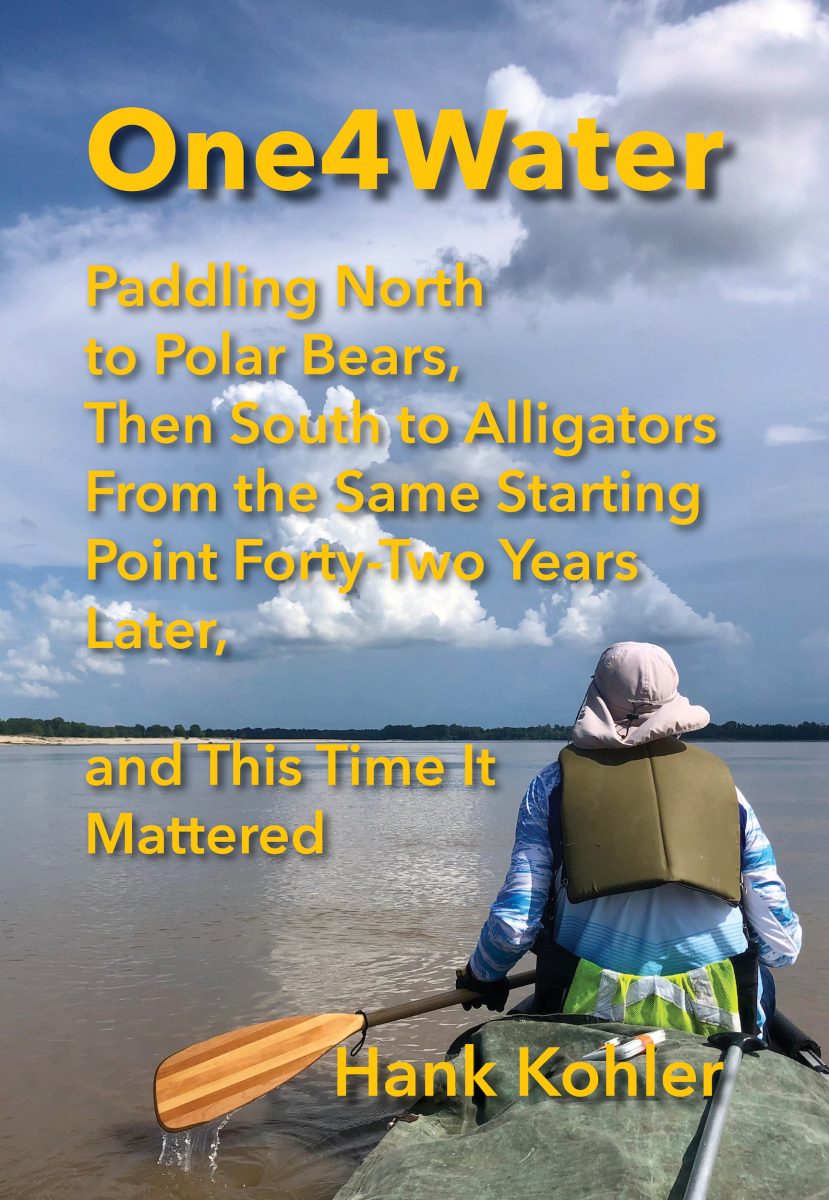 Hank Kohler just published his first book with us about his travels down the Mississippi River by canoe. In the introduction to the book he writes:

In 1979 three companions and I paddled two canoes from near our cabin in west central Minnesota to Hudson Bay. We traveled about 1300 miles in seventy days and went from agriculture to forested lakes and finally the sub tundra region where we had a polar bear lope through our camp.

In the spring and summer of 2021 I paddled over 1900 miles from the same starting point in the other direction to the Gulf of Mexico. With the help of friends who took turns in the front of the canoe, we were able to raise tens of thousands of dollars for conservation efforts. Most of the donations came from a Facebook account where I posted daily reports that let people know where we were and what we had been experiencing. It was something I looked forward to each night after the tents were up, and while watching the sun set across the Mississippi. Soon we had quite an online following. I enjoyed reading the comments and concerns and was asked by several individuals if I would write a book about the adventure that would describe the reasons behind the endeavor and what it was like, mile after mile.

I began to embrace the idea but felt it important to have some additional content beyond our day-to-day happenings including thoughts, observations, and opinions. I didn’t want it to be scientific and choppy. I hoped the book would have an easy, comfortable flow to it, like the river itself or when you’re listening to a familiar country ballad. I also decided to include at the end of a day’s narrative a suggested song to accompany the events. You could read this book like any other and just go through it at your normal pace, or you could make it last and do a page each night while the musical selection for the day plays on your phone. Then the book will take as long as our adventure and you will have something to look forward to every day, just as we did.

When friends ask about the book you can say that it’s a tough read; it took me two months to get through it! Now imagine that we are sitting around a campfire on a warm August night swapping tales. The twilight has faded to dark, the stars and fireflies appear as the barred owls and coyotes start their serenade. Someone adds another stick to the fire and says “Hank, you’re up!” Looks like it’s my turn so sit back and enjoy. This is my story…

Hank Kohler, born in 1952, grew up on a family farm in northwest Iowa. He has a degree in Education from the University of Northern Iowa but became a restaurant owner—not a teacher—during his working years. Mr. Kohler enjoys spending as much time as possible on lakes and rivers and was the recipient of the 2016 Olav Smedal Conservation Award sponsored by the Ames, Iowa Chapter of the Izaak Walton League. He has written two stories published by Iowa Outdoors. “Rocks in the River” and “The Ice Shack”. Mr. Kohler lives in Ames with his wife Anne. They have three children: a son Andy and daughters Robyn and Kerry. One4water is the author’s first book.