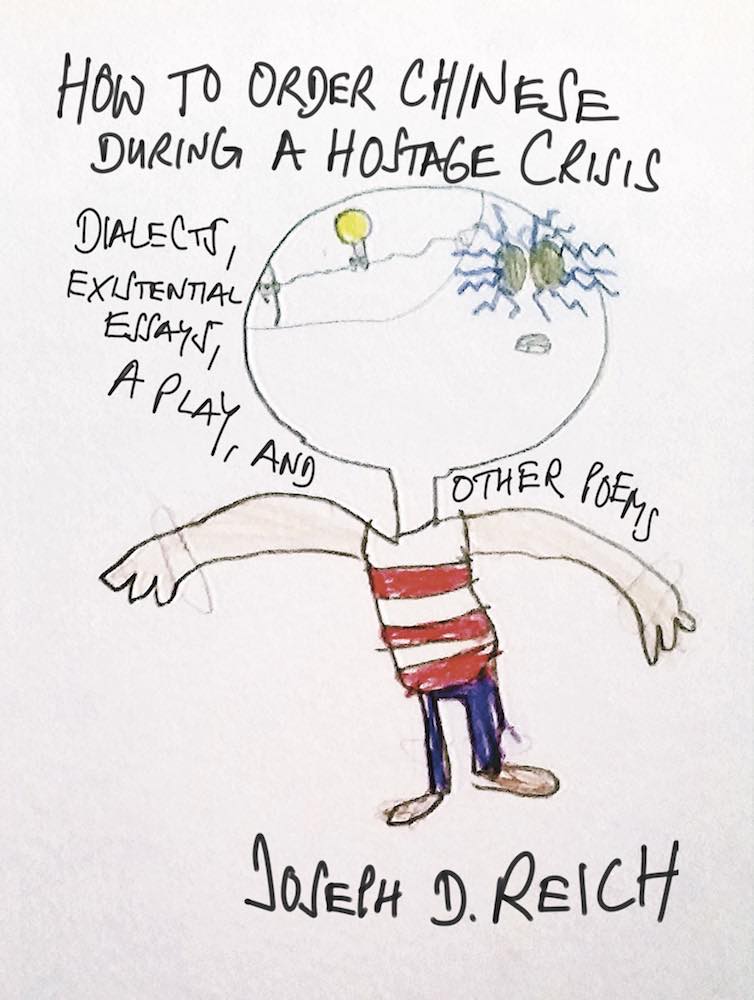 In Joseph D. Reich’s most recent book of poetry, How To Order Chinese During A Hostage Crisis, he colorfully and cleverly narrates in confessional, narrative and stream-of-consciousness style and form, the troubling and often maddening, ‘absurd,’ social and cultural landscape of present day, contemporary America, combining a whole wide array of different eclectic genres from poetry to prose to satire to aphoristic writing to existential plays to philosophical and social-cultural essays, in order to bring this anguished and profound point home. He simultaneously plays the role of both lone, solitary protagonist and ragged raconteur, as well as wanderer and social observer, disenfranchised, alienated, always just outside a seemingly very single-minded, co-dependent culture, which appears obsessively bent on all its gadgets and gizmos, self-interest, self-importance, and vulgar and obvious materialism, eventually, ironically, developing something of a collective, distorted thought pattern and even delusional behavior. Reich satirically uncovers and exposes all of the rude and ignorant masks, contradictions, and role-playing of human nature, which appears to make up and infestate the landscape of modern-day America

Praise for How To Order Chinese During A Hostage Crisis

Inside Reich’s writing, you could pitch a tent and roast some hot dogs on whatever wood was near and just stream consciousness—poems give way to testimonials then stories and film memories and there The Graduate and over there Blue Velvet and just when you settle in for long rides, the short bumps, and then ‘wild coyote shows up to our screen door/with a record player strapped to his back…’ You could stay awake for a year inside Reich’s book—it’s long enough, it’s wide in places. How to Order Chinese During a Hostage Crisis is a buffet, not a piece of pizza. ‘Sometimes you gotta just tempt fate/if it’s sitting around being lazy all day.’

Joseph Reich is a social worker who lives with his wife and twelve-year-old son in the high-up mountains of Vermont. His escape to there came very close to The Von Trapps. He has been published in a wide variety of eclectic literary journals both here and abroad, been nominated six times for The Pushcart Prize, and his books in poetry and cultural studies include “If I Told You To Jump Off The Brooklyn Bridge” (Flutter Press), “Pain Diary: Working Methadone & The Life & Times Of The Man Sawed In Half” (Brick Road Poetry Press), “Drugstore Sushi” (Thunderclap Press), “The Derivation Of Cowboys & Indians” (Fomite Press), “The Housing Market: a comfortable place to jump off the end of the world” (Fomite Press), “The Hole That Runs Through Utopia” (Fomite Press), “Connecting The Dots To Shangrila: A Postmodern Cultural Hx Of America” (Fomite Press), “Taking The Fifth And Running With It: a psychological guide for the hard of hearing and blind” (Broadstone Books), “Scenes From The Dynamite Stand” (Bedlam Press), “The Hospitality Business” (Valeveil Press), “The Rituals Of Mummification” (Sagging Meniscus Press), “Magritte’s Missing Murals: Insomniac Episodes” (Sagging Meniscus Press).

The easiest way to buy the book online is at Amazon. If you plan to purchase the book for a library, bookstore, or an institution, download the Book Order Form with a special discount here, then fill it out and scan/email it to us. If you prefer to buy the book directly from us, send us a note through our contact page.

Golisch – We All Can Fly